Mankind Is Not Doomed To Live a Short Lifespan

The news headline is discouraging to longevity seekers. Researchers recently said “We can’t cheat death!” — that the ageing process has not slowed down in humans- we’re just not dying younger.  We are not adding years to the end of life.

After antibiotics, vaccines, organ transplants and modern medicines that only quell symptoms, anti-ageing researchers say there isn’t much that can be done to extend the human lifespan. Most of the added years of life have already been achieved. The variance we now observe in human lifespan has more to do with income and public hygiene than whether you eat Wheaties for breakfast or yogurt with dinner.

But that is an incomplete way of looking at human lifespan. The so-called “Invariant Rate Of Ageing” theory completely ignores the last 16 years of progress in our understanding of why humans age.

Humans don’t all march together to the grave. Even the researchers themselves say their “Invariant Rate Of Aging” hypothesis “does not rule out heterogeneity in the rate of aging among individuals within a population.”

We now know that our genes can be altered to molecularly mimic a calorie-restricted diet known to double the lifespan and healthspan of all living forms of life.  An oversimplistic approach would be to tickle a survival gene and live one-hundred years and beyond. 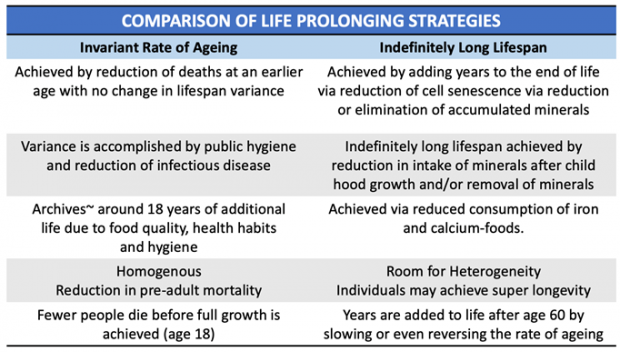 The oldest human that ever lived in modern times questioned

True, the oldest modern human being lived 122 years, but then researchers discovered that was achieved by deceit.  Jean Calment of France was replaced by her daughter in order to avoid an inheritance tax.   It doesn’t appear efforts to achieve super longevity will ever approach those of biblical patriarchs; or does it?

If an anti-aging pill were to be developed…

Here is what we know now.

If an antiaging pill were to be developed today it would activate the Sirtuin1 survival gene; it would inhibit the NFKappa B gene and slow or even reverse cell senescence (loss of ability of cells to renew themselves). It would also reduce low-grade inflammation which is the hallmark sign of ageing (called inflammaging). It would overcome even the worst diet and health habits. Such a pill exists today.

Is it really scientifically impossible to live in good health beyond 100 years?  One wonders if negative reports like these are meant to discourage longevity seekers for political, social or economic reasons, rather than lack of scientific substantiation.

Despite thousands of scientific reports pointing to the fact it is now scientifically possible to prolong human life indefinitely, anti-aging pills are thrown under the rug.  What is biologically possible is not politically or financially palatable.  Anti-aging pills by definition would eliminate chronic age-related disease, the bread and butter of hospitals and drug companies.

It can be said that Americans are over-medicated; 24% take three of more prescription drugs; almost 13% take five or more Rx drugs.  Almost 80% of doctor visits are for prescription drugs.  Many people who take resveratrol pills today are otherwise free of medication.

This simply means people who opt to use so-called anti-aging pills have to make independent decisions to do so, outside the guidance of modern medicine.

Could a single molecule overcome the ravages of aging?  The researcher who in 1997 initially reported on the promise of resveratrol to quell the many diseases of mankind says over 20,000 studies now confirm his initial studies – that resveratrol is a miracle molecule.  His 1997 report said: “Implementation should commence immediately.”  That was 23 years ago.

Out of 1000 plant-based natural molecules, resveratrol stood out as the most promising pain reliever and anti-cancer agent.  There is no natural or synthetic