Listen to a reading of this article:

Iraq war architect Donald Rumsfeld has died. Not in a prison cell in The Hague, not murdered by bombs or bullets, but peacefully in his home, surrounded by loved ones, a week and a half shy of his 89th birthday.

The imperial media are giving their fallen master a king’s tribute, with headlines describing the psychopathic war criminal as “a cunning leader“, “a man of honor and conviction“, or simply as “Former defense secretary at helm of Iraq, Afghanistan wars“.

The cancerous Washington Post, who just the other day mocked the life of the late antiwar hero Mike Gravel with an obituary branding him the “gadfly senator from Alaska with flair for the theatrical,” describes the child killer Rumsfeld as the “influential but controversial Bush defense secretary” in its headline about his death.

The New York Times wasn’t much better. Take the headline “Mike Gravel, Unconventional Two-Term Alaska Senator, Dies at 91 — He made headlines by fighting for an oil pipeline and reading the Pentagon Papers aloud. After 25 years of obscurity, he re-emerged with a quixotic presidential campaign.” Compare this to the headline “Donald Rumsfeld, Defense Secretary During Iraq War, Is Dead at 88 — Mr. Rumsfeld, who served four presidents, oversaw a war that many said should never have been fought. But he said the removal of Saddam Hussein had ‘created a more stable and secure world.’”

Donald Rumsfeld had the distinction of being the only defense chief to serve two nonconsecutive terms: 1975 to 1977 under Gerald Ford, and 2001 to 2006 under George W. Bush. He also was the youngest, at 43, and the oldest, at 74, to hold the post. https://nyti.ms/2UOUaaJ 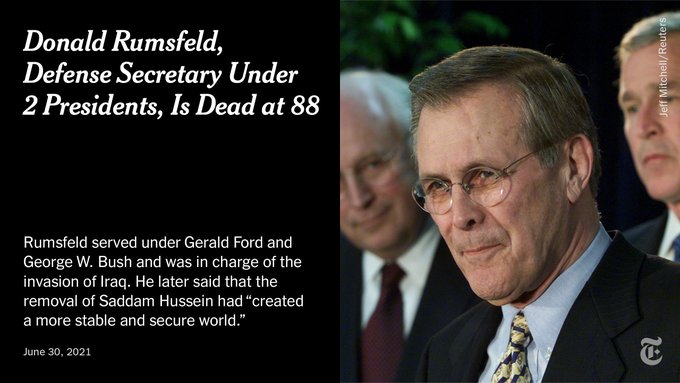 244 people are talking about this

There’s been criticism as well, of course; online sentiments about Rumsfeld’s death have not been nearly as worshipful and hagiographic as they’ve been toward other disgusting war whores like John McCain. But in the end all that matters is that he lived a long, full life, without ever having faced even the slightest single consequence for the horrors he unleashed upon our world; without even so much as sustaining any meaningful damage to his reputation.

This despite the fact that it’s been public knowledge for years that Rumsfeld began orchestrating the unforgivable invasion of Iraq within hours of the 9/11 attacks and told numerous lies in order to set that invasion in motion. He also oversaw the intervention in Afghanistan which he and his Bush administration cohorts had been planning before 9/11, beginning a decades-long occupation about which the public has been pervasively lied to from the very beginning by US officials in general and by Rumsfeld in particular. (But remember kids, only crazy conspiracy theorists question the official narrative about 9/11.)

When we are little, we are taught that we live in a nation of laws, where bad guys are thrown in prison by the good guys who are in charge of things. Because our mental programming continues for the rest of our lives in the form of mass-scale propaganda designed to manufacture consent for the status quo, most of us tend to hold onto this childish model of the world to some extent throughout adulthood.

In reality, exactly zero percent of the world’s worst people are in prison, but some of the best people are. The fact that Donald Rumsfeld lived a long life of freedom while Julian Assange wastes away in Belmarsh Prison proves the world doesn’t work the way we were taught in school. The very worst bad guys are not put in prison by the good guys who run things, because the very worst bad guys are the ones who run things.

1 in every 5 Iraqis has someone in their family who died because of the invasion of Iraq.
More than half of all babies born in Fallujah between 2007 and 2010 were born with a birth defect.
The average lifespan in Iraq is 70.
Rumsfeld died at

Mike Gravel, former US senator for Alaska, dies at 91 – Homer News Justin Amash on How To End the Civil War in the Libertarian Party. The only L.P. member to ever hold national office says the party needs to stop being gratuitously shocking and start making the principled case for limited government.

Living with Covid and extreme individualism – The Guardian

Question: What are your views on abolishing the electoral college and/or ranked choice/multiple choice voting?