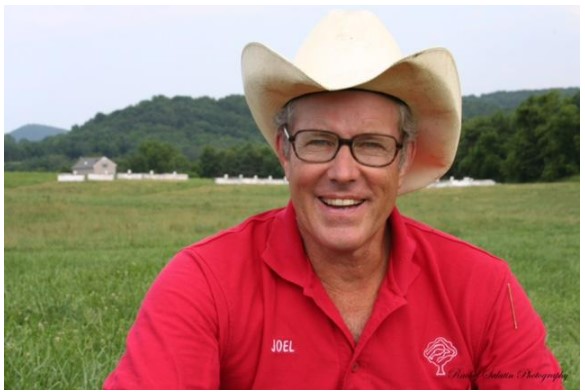 Sitting on a picnic bench across from Joel Salatin on a beautiful day on Polyface Farm in Virginia’s Shenandoah Valley, I am struck with how much the farmer, author and lecturer reminds me of Ron Paul: Mission-driven, a leader who has inspired millions around the world, a Christian, family man, libertarian, self-sufficient, charismatic, energetic, enterprising, optimistic, hard-working, a teacher, a communicator, a brilliant unorthodox thinker, confident yet humble, good-humored, athletic, frugal, and possessing a strong bearing and commanding presence. A great and good man.

If you type the question “Who is the most famous farmer in the world?” into Google, the result is Joel Salatin. He has appeared in many documentaries on factory farming and/or the rogue food movement including Polyfaces, Food Inc., Fresh, Revolution Food, Sustenance, Freedom From Choice, What’s With Wheat?, American Meat, and At the Fork. Ron Paul also appears in Farmageddon which shows government agents swat teaming family farmers for selling raw milk, destroying their animals and their livelihoods. Salatin has written 12 books, lectured all over the world, edits the Stockman Grass Farmer, and the self-described “lunatic farmer” shares his musings online.

Four generations of Salatins live and work at Polyface: Joel’s mother Lucille who originally owned the 550-acre farm with her husband Bill who passed away in 1988; Joel, Teresa, his wife of 40 years, their daughter Rachel who does marketing for the farm, and son Daniel who has been managing the farm since he was 18, his wife Sheri and their three children. The farm provides food for 3,000 in the community and local restaurants.

At Polyface Farm simple farming methods are modified by new technologies. The farm is regenerative, sustainable and organic: no pesticides, chemical fertilizers or antibiotics have ever been used and seeds have never been planted. The carbon-based ecosystem is teaming with life. The movement of the animals and their meeting with grass on the farm is carefully and lovingly managed. High-tech fencing keeps the animals in and the predators out. The cows, chickens, hens, baby chicks, and rabbits look healthy and content and so does the team who work on the farm. People travel from all over the world to visit Polyface, take a tour, participate in summits, and learn how to start or develop their own farms.

A palpable spirituality permeates this space: the cycle of life is fully expressed, with every living plant, animal and person doing their part and working together in perfect synergy. Life is biological and therefore fundamentally sacred and the sacrifice of life to feed or serve others is understood. This philosophy is most certainly in stark contrast with the transhumanist agenda of the global technocrats to transform humans into machines.

Over the past 50 years factory farming dominated by industrial giants took control of agriculture in America, with government regulations favoring the monopolists and governments subsidizing many farmers. For decades growing consumer awareness and concern about industrialized farm products and the globalized industrial food system vastly increased the market and demand for organics, but agribusiness has incrementally hijacked the label organic. While organic family farms constitute only 2% of agriculture in the US and the average age of a family farmer is 60, the local rogue food movement is growing, especially since the Covid coup. Salatin says if the farming methods used at Polyface were globally implemented, all the carbon depleted from the soil since the industrial age would be sequestered within 10 years.

How did you get started in farming?

My dad was an accountant and my mom a teacher. They didn’t see this farm as a business. They never made money. We stand on the shoulders of greatness. We got a blank slate. We leveraged a simple but elegant basic philosophy of non-chemical using nature as a template, a carbon economy. Teresa and I lived in the attic on $300 month and drove a $50 car. We were married 20 years and figured out all we spent on cars and it didn’t add up to $20,000. We have been frugal. We never had a TV. If we made a windfall we wouldn’t change anything. We enjoy writing, have no desire for material things, and have a happy, content, well paid team. I’d rather be a pauper with a team who would die for me than die with millions in the bank with team members who don’t like me. We put a lot of attention on what are we here for – the sacredness and righteousness of what we are doing for the land, culture, community, and people. It doesn’t get any more noble than healing.

When did the modern organic food movement begin?

J.I. Rodale published the Organic Farming and Gardening magazine in 1942, there was the Agriculture Testament by Sir Albert Howard in 1943, Rachel Carson’s “Silent Spring” in 1962, Mother Earth News during the Vietnam War era, Wendall Berry’s “Unsettling of America” in 1977. The idea of organic farming was then codified. There was “Fast Food Nation” by Eric Schlosser, “The Omnivore’s Dilemma” by Michael Pollan, and the documentary Food, Inc.

How did “the Covid coup” affect the Polyface Farm business?

Mouse Utopia and The Blackest Pill