Independence Day and the Perversion of American History 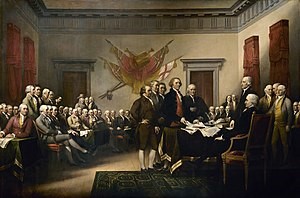 July 4, “Independence Day,” has become for most Americans little Dmore than another holiday, a day off from work, and a time to barbecue with family and friends.

Yet, the Declaration of Independence and the day we set aside to commemorate it should make us reflect on the sacrifices of the men who signed it and what they intended. Representatives from thirteen colonies came together to take a momentous step that they knew might land them on the scaffold. They were protesting that their traditional rights as Englishmen had been violated, and that those violations had forced them into what was actually in many ways America’s real “civil war”: English subjects in America against the English government at Whitehall.

For many the Declaration of Independence is a fundamental text that tells the world who we are as a people. It is a distillation of American belief and purpose. Pundits and commentators, left and right, never cease reminding us that America is an “exceptional” nation, “conceived in liberty and dedicated to the proposition that all men are created equal.”

Almost as important as a symbol of American belief, we are instructed, is Abraham Lincoln’s Gettysburg Address. Lincoln intentionally places his short peroration in the context of a particular reading of the Declaration. He bases his concept of the creation of the American nation in philosophical principles he sees enunciated in 1776, and in particular, on the idea of “equality” and a new national unity undreamt of by earlier generations. With this understanding, he charts a new and radical departure:  “this nation…shall have a new birth of freedom,” an open-ended invitation to future revolutionary change.

In his view, America is a nation whose unbreakable unity supersedes the recognized and prior rights of the states and which finds that unity in “mystic chords of memory.” The problem is that this interpretation, which forms the philosophical base of both dominant “movement conservatism” today – neoconservatism – and the post-Marxist multicultural Left, is basically false.

Lincoln opens his address, “Four score and seven years ago our fathers brought forth ….” There is a critical problem with this assertion. It was not the Declaration that “created” the new nation; the Declaration was a statement of thirteen individual colonies, announcing their respective independence from the mother country, binding themselves together in a military and political alliance. It was the Constitution, drafted eleven years later (1787), after the successful conclusion of the War for Independence, which established a new nati

Brickbat: Tie a Purple Ribbon Round the Old Oak Tree One good apple spoils the bunch.