The pre-positioning of the BBC correspondent on HMS Defender shatters the pretence that the BBC is something different to a state propaganda broadcaster. It also makes plain that this propaganda exercise to provoke the Russian military was calculated and deliberate. Indeed that was confirmed by that BBC correspondent’s TV news report last night when he broadcast that the Defender’s route “had been approved at the very highest levels of the British government.”

The Prime Minister does not normally look at the precise positions of British ships. This was a deliberate act of dangerous belligerence.

The presence of a BBC correspondent is more than a political point. In fact it has important legal consequences. One thing that is plain is that the Defender cannot possible claim it was engaged in “innocent passage” through territorial waters, between Odessa and Georgia. Let me for now leave aside the fact that there is absolutely no necessity to pass within 12 miles of Cape Fiolent on such passage, and the designated sea lane (originally designated by Ukraine) stays just out of the territorial sea. Look at the definition of innocent passage in Article 19 of the UN Convention on the Law of the Sea: 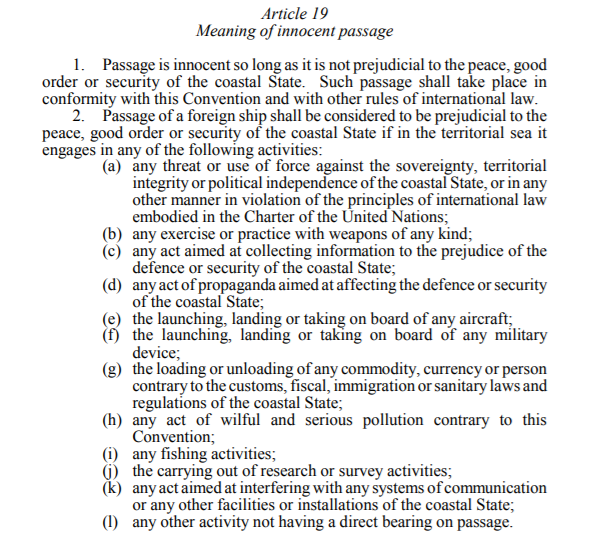 Very plainly this was not innocent passage. It was certainly 2 (d) an act of propaganda, and equally certainly 2 (c), an exercise in collecting information on military defences. I would argue it is also 2 (a), a threat of force.

So far as I can establish,

Rand Paul and Ron Paul Relationship: All About The Father-Son Duo – OtakuKart