This paper has not been written by a microbiologist or virologist but by a scholar with a background in security politics, military strategy, and history in an attempt to understand the present crisis, which demands knowledge in several disciplines. We know that the new coronavirus (SARS-CoV-2) with its disease COVID-19 is very contagious. Many people have died from it, but there is a disagreement about its mortality rate, the measures used, the vaccines, and about the reliability of the figures for several countries. What we know, however, is that this pandemic totally has dominated the media coverage in the West. In Part 1, I will discuss what COVID-19 is, whether it is a result of just a natural process or not, and I will discuss US policy and thinking about biological warfare. In Part 2, I will discuss the spread of the virus, its likely origin, pandemic simulations, and possible explanations.

In The Lancet article (January 24, 2020), Chinese scientists had analyzed the 41 first patients that by January 2 were confirmed to be contaminated by the new coronavirus, a new pneumonia. Many of them had been exposed to the Huanan seafood market, but one third had not. Three of the first four cases (by December 10) and the very first case, a 55 years’ old man, had no ties to the market. He was from the Wuhan area (Hubei Province) with symptoms on December 1. He would have been infected in late November. The first patient treated at a hospital was brought in on December 16. On December 15-20, all 10 new cases had been exposed to the seafood market. Up to January 2, 16 of 27 new cases had had ties to the seafood market, The Lancet wrote.[1] On December 18, a 65-years old man from the seafood market came to the Wuhan Central Hospital with a suspected pneumonia. He had had symptoms from December 15 and became worse a week later. On December 24, the hospital sent samples to a private laboratory in Guangzhou. Chief Physician for Respiratory Medicine at Wuhan Central Hospital, Zhao Su, said that the Guangzhou laboratory called back on December 27, and said that it was ”a new coronavirus”.[2] One day earlier, on December 26, Hubei Provincial Hospital had received a couple with symptoms from December 20 and 23. The respiratory doctor Zhang Jixian made a CT-scan of their lungs (also of their son), which on the next day made her notify the Wuhan Center for Disease Control and Prevention [CDC]. She had had experience from the SARS epidemy in 2002-03 and was worried for something similar in Wuhan. On December 29, the CDC laboratory found a virus similar to the SARS (Severe Acute Respiratory Syndrome) CoV. It was described as a “new coronavirus: SARS-CoV-2”. The alarm went off. Zhang ordered personnel to wear protection.[3] 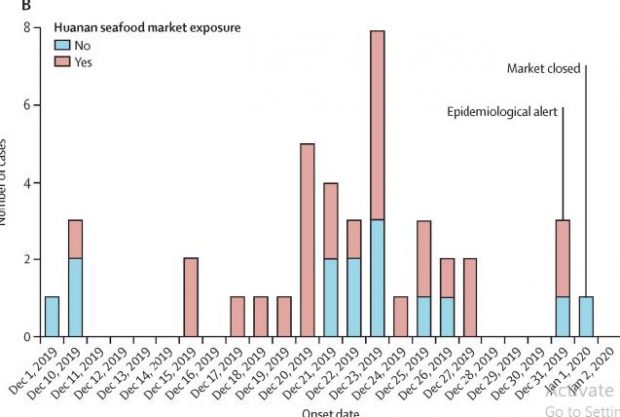 Left: The Lancet article from 24 January showing cases from the Huanan seafood market (red) and cases from outside the market (blue) from December 1 to January 1.[4] Right: microscope photo of SARS-CoV-2.[5]

On December 30, the Director of the Wuhan Institute of Virology called its world-famous expert on bat coronaviruses, Shi Zhengli, who was at a conference in Shanghai. The director told her: “drop whatever you are doing and deal with it now”. “The Wuhan [CDC] had detected a novel coronavirus in two hospital patients with atypical pneumonia”.[6] Chinese National Health Commission (NHC) was informed. The same day, Director of Emergency Wuhan Central Hospital, Ai Fen, saw a report about a coronavirus similar to “SARS” and notified other departments and another hospital. A doctor at Wuhan Central Hospital, Li Wenliang, wrote at 17.43 on December 30 to his private WeChat group (“China’s Facebook”): “[7] confirmed cases of SARS were reported from Huanan seafood market”. The information turned up on Chinese social media,7 which was the first public recognition of a new virus. Li had spoken about a regular SARS virus, but one hour later he corrected this. Another hour later, also other doctors, Liu Wen and Xie Linka, wrote to their WeChat groups about “a pneumonia of unknown origin (similar to SARS)” at the Huanan seafood market.[8] The Director of Chinese CDC Gao Fu actually learned about the virus from the internet. He called Wuhan CDC that had found the new virus the day before.[9] Information about the virus was published before it was scientifically confirmed. The family of the first patient had had no symptoms, while the family of the December 26 cases had, which led to precaution. Medical personnel had not yet symptoms. Most cases were from the seafood market making Chinese officials first believe that the virus originated from animals at the market rather than being transmitted via humans, but the evidence was contradictory.

On December 31, the WHO (World Health Organization) was notified: 27 cases of “pneumonia of unknown cause”: “all patients are isolated […] no evidence of significant human-to-human transmissions”.[10] Memory of SARS led to precaution. Wuhan Health Commission made an emergency notification about the “unexplained pneumonia”. They suggested people to wear face masks and avoid public spaces.[11] Also on December 31, Chinese CCTV, Reuters, South China Morning Post, and Deutsche Welle reported about a “pneumonia outbreak”, a possible SARS-like virus.[12] US Director of the National Institute of Allergy and Infectious Diseases (NIAID), Anthony Fauci and the US CDC Director Robert Redfield were informed.[13] Already on January 1, US CDC had a detailed report about the virus. The Americans seemingly knew as much as the Chinese knew at that point. Chinese NHC sent an expert team to Wuhan and set up an emergency response group.[14] On January 3, Redfield was briefed by his Chinese counterpart Gao Fu. Redford told Secretary of Health and Human Services Alex Azar that “China had potentially discovered a new coronavirus”.[15]

From early or mid-December, there were single cases of pneumonia in Wuhan, but in late December there were up to 20 cases, most of them directly linked to the seafood market. In the very last days of December, Wuhan hospitals became aware of an “atypical pneumonia”. On December 27, Zhang Jixian at the Provincial Hospital suspected a contagious virus. On the same day, the lab told Zhao Su at the Central Hospital that a patient was believed to be infected by a new coronavirus. Two days later, the Wuhan CDC identified a SARS-like virus in its lab and Chinese NHC was notified. Now, single doctors in Wuhan realized that a “new coronavirus” perhaps was the cause of a pneumonia at the market. On December 30, the Wuhan Institute of Virology was notified. A Wuhan hospital report spoke about a SARS-like virus, which appeared on internet the same evening. On December 31, the WHO was notified. The Wuhan Health Commission presented early guidelines. Media spoke about an outbreak of pneumonia in Wuhan. All this very early information appeared on December 29-31.

The City of Wuhan, however, was not pre-occupied by a couple

Steven Crowder throws a fit and runs away from a debate Supreme Court rules in favor of religious freedom regarding Catholic adoption agency not being contracted by Philadelphia for discriminating against same sex couples.

Any signs of a rise in libertarianism since covid?

The Moral Law versus Tyranny